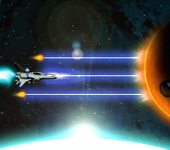 Renadius
The fight for planet Gradius.
Created by
Hyun

PROJECT INFORMATION
This was supposed to be done for the Retro Remakes competition, but unfortunately due to a lack of time - I never got round to doing it.

If you don't know what Renadius is by looking at the screenshots - it's based on Konami's Gradius series, taking the best from each of the games, and trying to capture the look of Gradius V. At the moment, I'm just working on the gameplay mechanics (especially the multiples/options that follow you about). So far everything is going smoothly.

The game isn't a major priority at the moment, and there isn't enough reasonable content to release a demo yet for everybody to try out (I could, but you would download about 2.6Mb to shoot down a couple of enemies.) However, if someone keeps poking me with an artistic stick, I'll be more than eager to finish this by July at the latest. I thought it would be nice to show what I get up to in my spare time!